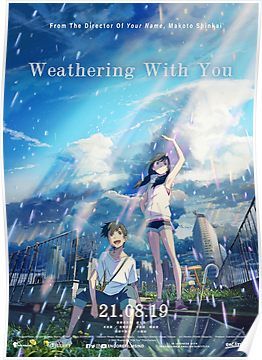 A decent and somewhat imaginative enough anime flick, though one that I didn't find quite as good as the same director/writer's Your Name from a couple of years prior.

The movie follows Kotaro, a high-schooler from a small, isolated Japanese island, who runs off to Tokyo to be a part of the big city. Inexplicably, the metropolis has been suffering a months-long rainstorm with no end in sight. After living on the street for a while, Kotaro lands a menial gig doing research for a small-time gossip newspaper for a scruffy but friendly hustler. Kotaro soon runs into Nana, a young girl who seems to be able to manipulate the weather. Specifically, through prayer, Nana can have the storm clouds open and allow the sun to shine through. Kotaro helps her monetize this strange power, but eventually Nana is convinced that she is going to die because of this supernatural gift.

The movie is touching and has some very palpable human drama and humor in it. And like Shinkai's previous film, Your Name, I love that the supernatural elements are never really explained. It allows one to read into them whatever they wish - something that I wish more filmmakers had the courage to do. One may raise an eyebrow or two at the melodrama, especially during the third act, but it doesn't completely ruin the magic of the film.

The voice acting is fairly solid, but it is very much an anime film, meaning that you can expect some pretty over-the-top reads and bombastic emoting. The dialogue itself is fine, but one will have to be ready for a lot of top-of-the-lungs declarations of intentions and feelings. Some of it is typically humorous, but some of it is meant to evoke empathy. It doesn't always work very well, but this is just one of the elements of the genre that a non-Japanese viewer has to accept.

So it's a solid anime flick for those who enjoy the genre when it puts away the absurd superpowers and form-fitting action wear. There are better Japanimation dramas, to be sure, but this one is worth checking out if you like others that you've seen before. I would start with Your Name, though.
Posted by Scott Hearon at 6:52 PM